Global M&A activity in the mining sector rose by 33 percent in 2016. A rush of high-profile M&A deals during 1H17 is encouraging market participants that the industry could be set for its most active year since 2012

The year began with a bang in January when Goldcorp agreed to sell its Los Filos asset in Guerrero to Leagold Mining, in a deal worth US$350 million, funds it then used to acquire Exeter Resource Corporation for CA$247 million. This was followed in April by Barrick Gold’s decision to sell 50 percent of its giant Veladero mine in Argentina to stateowned Chinese investor Shandong Gold for US$960 million.

Considering the encouraging performance of precious metals in 1H17, industry analysts believe the green shoots of recovery for the mining M&A market could flourish as the year progresses. “With the prices on an upward curve again, we have seen more market re-evaluation of companies within the sector and investors are now looking at the sector in a more positive light,” said Philip Hopwood, Global Mining Leader at consultancy Deloitte. “Many mining companies have started to outperform the stock markets so there is value in the sector and returns to be made.”

The flurry of activity is an encouraging sign that confidence is beginning to return to a sector that was badly hurt by a downturn in commodity prices that lasted from 2012-2016. In 2007, global M&A value peaked at over US$210 billion, according to accountancy firm EY. In 2016, the figure stood at just US$44.3 billion, the lowest levels since 2004 and 9 percent lower than the previous year. That said, the number of deals in 2016 rose YOY by 33 percent to 477, an early sign that the sector was ready to turn a corner.

In Mexico, the first signs of recovery emerged in 2H16, with the acquisition of the Yamana Gold’s Mercedes mine by Premier Gold Mines for US$122 million, the standout deal in the latter part of the year. Goldcorp, the world’s fourth-largest bullion producer, then sold its noncore Los Filos mine to little-known outfit Leagold and then swiftly entered into an agreement to acquire Chile-focused junior explorer Exeter Resource.

“We sold the Filos Mine to Leagold as part of our strategy to concentrate on assets of a certain size and quality,” says Michael Harvey, Director for Corporate Affairs and Security at Goldcorp Latin America. “Filos is a fine asset but was too small for our strategy.” Goldcorp also sold its 21 percent stake in the San Nicolas property in Zacatecas to Teck Resources for US$50 million, before parting with its Camino Rojo asset in a deal with Orla Mining that provided Goldcorp 19.9 percent of Orla’s outstanding common shares.

JUNIORS TURN TO M&A FOR GROWTH

A reactivated sector provides opportunity throughout the mining value chain, and a number of smaller deals confirms the bullishness of the world’s junior producers.

In February, McEwen Mining said it would be acquiring Lexam VG Gold in a friendly takeover, while in April, Gold Mining announced an agreement to acquire all outstanding common shares of Colombia-focused Bellhaven. Junior silver producer Excellon Resources publicly stated that it will be actively pursuing M&A deals in 2017 as a means to complement its exploration activities and generate shareholder value.

“Apart from targeting organic growth through exploration, we are looking to add to our production profile and increase cashflow through M&A transactions,” said Ben Pullinger, the company’s Vice President for Geology. “We have an experienced management team and would like to leverage their expertise to grow the company further.”

Any sustained rise in mining M&A deals is dependent on commodity price but market conditions point to a strong year for metals. The new presidential administration in the US is still finding its feet but a planned infrastructure push should drive demand for copper, iron ore and other industrial minerals upward. Meanwhile, any uncertainty regarding US fiscal and foreign policy would send investors rushing to the safe haven provided by precious metals.

On the production side, falling grades and exhausted deposits will also squeeze supply. According to Harvey, production levels and reserves have declined greatly over the past five years, while real and nominal interest rates remain low, encouraging investors to buy gold and silver. “Future supply will be tighter,” he said.

Of course, there is still some way to go before M&A in the sector reaches the heights of 2007. But for Gutierrez, all the fundamentals are there for the uptake in activity to continue into the second half of the year. “As a rule, M&A activity should pick up as prices increase and with the mine closures and labor conflicts going on in jurisdictions around the world, this should create a supply constraint that will push prices upward,” he said. “This could lead to more deals.” 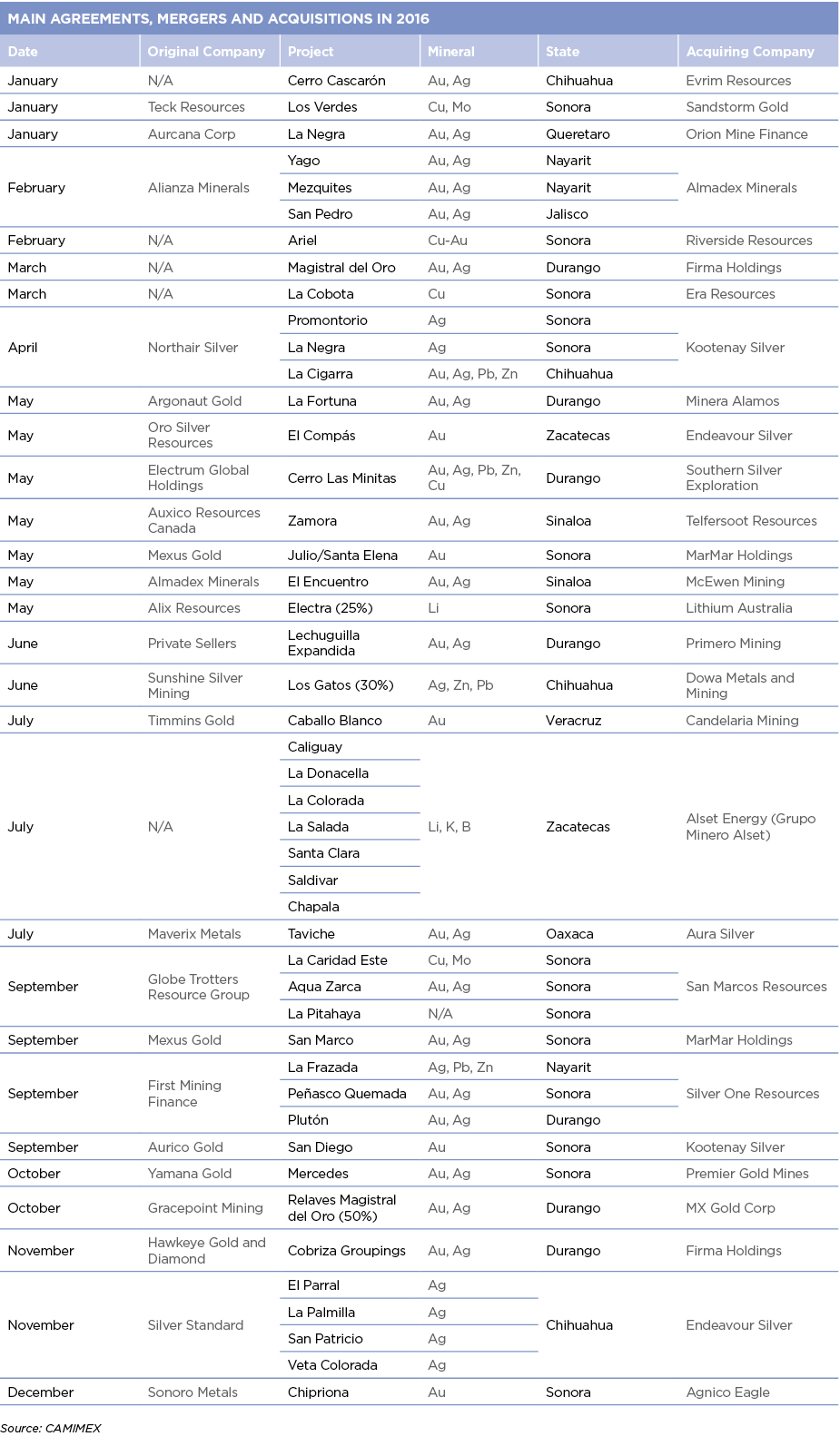